Skip to Content Jump to Main Navigation Skip to Search

You Are Here: Online Lecture on Pandemic Storytelling: Ansgar and Vera Nünning and James Phelan 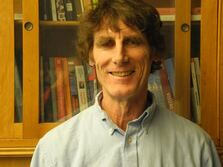